LastKnownMeal is a YouTube content creator with over 53k subscribers on YouTube. Covering a variety of the latest video games on the market, including The Witcher 3, Greedfall, and Witchfire, LastKnownMeal’s latest content has become very focused on the upcoming Cyberpunk 2077 video game set for release on November 19th of this year. He has also started covering live action adaptations of video games, such as the new Witcher series on Netflix.

Last Known Meal is perhaps one of the best sources of information on CD Projekt Red news, breaking down everything about lore, classes, playstyles, etc. of all the different content related to company like The Witcher, Gwent, and Cyberpunk 2077. But who exactly is LastKnownMeal, and what can he tell us about the Cyberpunk genre? Let’s find out.

1. How did you get introduced to Cyberpunk?

I was introduced to Cyberpunk with movies like Blade Runner, The Matrix, Johnny Mnemonic, and games like Deus Ex and System Shock. I knew a bit about Cyberpunk 2020 as a tabletop RPG but I never had a proper chance to play it due to a lack of people who were interested in that. Then after a while, I saw that CDPR released a teaser trailer for Cyberpunk 2077 and when I realized that it’s the same universe as Cyberpunk 2020 I decided to read more about it and was quickly sucked into a dystopian world full of technology and broken systems.

2. What made you decide to start the LastKnownMeal Channel? When did it start, and how did it become what it is today? Is there a story behind your name?

The channel that I have today started back in September of 2012, but I had various other channels over the past 10 years that I deleted. It started pretty much as a hobby, something that I loved doing because I love to create and edit videos. Back then I was doing various projects from documentaries, events, and short films that made me realize that I can bring that level of quality to my channel. After I graduated from Film and Theatre Academy as a producer I turned to my channel and made it first into a side job and now it’s become a career, which was always my goal because of how easy it is to reach the entire world basically through your own content and avoiding production studios and cinema, which is usually a long and difficult process. The amazing community that gathered around the channel is also a huge driving force for me and the work I do.

3.  Where do you get your ideas /inspiration for your videos?

I mostly get my ideas for videos by reading up on the source material I have around me and the games that I play. Sometimes an idea for a video will come by itself and sometimes if it is news-related content I try to format my videos in a way to present the news for the community in a fun and engaging way. Since I am generally a huge fan of RPG games, my inspiration can also come from just playing the game and noticing that I can bring something new to the table with my analysis and discussions. I can also thank an amazing group of content creators around me that inspire me every single day with their commitment and quality of videos they produce.

4. What are your top three Cyberpunk works, and why?

For me, the three most important works in cyberpunk as a sub-genre is definitely Neuromancer by William Gibson, the vision and work Mr. Gibson did pretty much set the bar for how cyberpunk is supposed to look like and how that future can easily become reality, which is something we see now. It’s actually amazing how he saw that all the way back in 1984. The next work is definitely Cyberpunk 2020 by R.Talsorian, not only did it become one of the cult classic TTRPGs, it also showed how the future is going to look like by analyzing the world around us and also because everything in the source material is based on almost real science and something that can be made possible and not only a work of fiction. It’s also the reason why we have Cyberpunk 2077 in the first place. And the last work I would definitely mention is Blade Runner, which for me personally is one of the best cyberpunk based movies out there, from the stunning visuals to the imagination that was put into the film and all the way to amazing iconic characters and roles all backed under the direction of Ridley Scott with amazing cinematography by Jordan Cronenweth.

5. I’ve noticed you have some interesting videos about classes in the Cyberpunk 2077 universe. Can you give a brief overview of each one, and maybe which one you’ll be choosing and why?

Absolutely, so Cyberpunk 2077 will have a fluid class system meaning that you will be able to combine skills from three main classes: Solo, Netrunner, and Techie. As a Solo, you are basically a one-man army, focused on combat and getting the job done. They usually work for fixers and various other entities. As a Netrunner, you take a different approach, you are extremely skilled in hacking and going inside the net and instead of being a combat solo, you will stay in the shadows and use everything around you to your advantage (everything is connected to a network in 2077, therefore if you gain access you can hack it and finish the job that way.) And finally, we have Techies that rely a lot on mechanical things around them, they are skilled in repairing and making stuff from the pieces of tech lying around you and by using those skills you are able to work with all the systems and use your trusty spider bot (called a Flathead) to help you finish a mission and use those skills on yourself or the vehicle you drive. 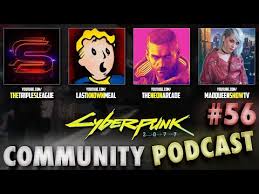 6. How did you come to join the community podcast, and what is it like being one of the 4 each week?

I was approached by MadQueen with an idea to have a Cyberpunk Community Podcast each Sunday and the goal was to unite the community and get together to talk about all the latest news and topics regarding the game. One thing which I found really interesting is that the podcast is going to rotate between four of our channels each Sunday. I actually had an idea for a Cyberpunk based podcast a long time ago which I never pursued that much, so to finally have people who are willing to collaborate and work together was definitely one of the best things to happen to me, and this channel. I couldn’t be more proud of the project we are involved in and being surrounded by amazing content creators can only help you grow and get inspired for the future. Every single Sunday the podcast is getting more and more people involved so it’s always a blast to talk with the group and just have fun doing it.

7. What are you looking forward to most for Cyberpunk 2077?

Regarding Cyberpunk 2077 I am mostly looking forward to the world and level design, since Night City will be one of the most detailed cities out there in a video game and because they are trying to create a living city which has its own soul and NPCs who have roles that are handcrafted will definitely be the biggest thing I want to see. The best way to immerse myself is not always the story but everything built around it.

8. Final question: What does Cyberpunk mean to you?

For me, Cyberpunk means everything because it’s one of the genres I fell in love with since I was a kid and the rise of technology always made me interested in what is possible and how tech can be used to aid our society. It also presents the harsh reality of what will happen to our world if the system we are in continues to grow and sadly since our world is more and more cyberpunk-like, it creates a whole new level of depth which can be explored and talked about. I always liked cyberpunk more than sci-fi in a sense because for me sci-fi in a classic sense was always way too Utopian for our society and does not present the realistic picture of a broken society as cyberpunk does.