If you missed Oblivion when it came out in 2013, I wouldn’t blame you. This movie went pretty much under the radar, and hasn’t been talked about since, but I remember watching it in the theaters and being blown away by how beautiful the movie looked. Which makes sense when you find out that a lot of the scenes were shot in Iceland. Oh and the soundtrack from M83 is incredible too, especially the final track. Take a look at the music video of the track, titled “Oblivion” featuring shiver-inducing vocals from Susanne Sundfør, and you’ll know what I mean.

Oblivion is a Utopian/Dystopian film with cyberpunk elements featuring Tom Cruise, Morgan Freeman, Olga Kurylenko (Hitman, Quantum of Solace), and Andrea Riseborough (Birdman). Directed by Joseph Kosinski (Tron Legacy), Oblivion is set in the post-apocalyptic future of 2077 where humanity fought and won against an alien race but at the cost of ravaging their planet. Cruise plays Jack Harper, a technician who fixes “drones” so they can fight against the remaining extraterrestrial scavengers, or “scavs” who are left on Earth after the war. The rest of humanity have relocated to a planet called Titan and Harper, along with his partner Vika Olsen, are tasked with protecting the Hydrorigs which are sucking up the Earth’s valuable waters in order to transport them to Titan and use them as a fusion energy source.

The greatest thing about Oblivion is the visuals.

And it’s not surprising, considering it was directed by the same person who brought us Tron: Legacy. The scenes that were shot in Iceland, along with the digitally edited scenes showing us a desolate post-apocalyptic earth, is stunning. Ruins of famous landmarks like the Golden Gate Bridge, the Empire State Building, an entombed public library, and even ballparks provide great contrast to the sterile, immaculately clean and futuristic station in the clouds from where Jack and Vika live.

In order to keep Jack and Vika focused on their mission, they had their memories wiped, but Jack remains uneasy due to sleepless nights plagued by dreams of a mysterious woman with dark hair that he feels he knows somehow but doesn’t remember. Which is why the story truly kicks off when Jack witnesses unknown objects landing from the sky, one of which contains the woman with dark hair that he keeps on dreaming about. This begins a thrilling race for Jack to discover the truth behind his assignment, and how not everything is as it seems. Unreliable memories as a basis for reality seems to be a common theme in many sci-fi and Cyberpunk films, but somehow it never seems to get old for me.

Morgan Freeman plays the leader of the Scavs in this film. He delivers a great performance, but I would have liked to have seen more from him, as he only appears about halfway into the movie, and his role is certainly a secondary one at that. Still, he is great at providing exposition!

Tom Cruise delivers an incredible performance, not just in the thrilling action scenes as he discovers the truth of his mission, but also in his very human moments as he shows his affection for the civilization that used to be, and to the plant Earth that he’s preparing to leave.

Oblivion is ripe with all kinds of futuristic, sleek technology that juxtaposes the dusty ruins of the world very well, particularly when we are presented with the tech and weapons the Scavs have available to them. The Scavs bring in a lot more of the Cyberpunk element that most are familiar with, while the modern tech that Jack has available to him brings the high-tech element. A couple examples of this is Jack’s highly-mobile helicopter, if you can even call it that. He sits in a glass cockpit that can swivel any direction, and with the helicopter Jack can take out a foldable, equally futuristic Motorbike for getting around on the desolate terrain.

It’s an E-bike that requires recharging, in case you were wondering.

The Drones Jack fixes are cold, deadly killing machines, a formidable ally and frightening foe all in one.

Another example of the futuristic tech is Vika’s office in their home where she acts as communications relay to HQ and as Jack’s eyes in the sky, making them “an effective team”. All done via sleek minimalist touchscreen technology.

The Music: An Incredible Soundtrack from M83 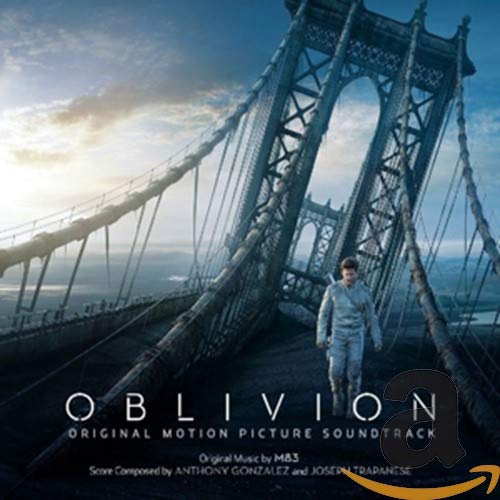 M83 is a French Electronic band that Kosinski had recognized as a band that would go really well with the movie from the beginning. He loved the result of the partnership with Daft Punk for Tron: Legacy, and wanted to do something very similar. “M83’s music I felt was fresh and original, and big and epic, but at the same time emotional and this is a very emotional film and it felt like a good fit” explained Kosinski in an interview with Collider. And it really shows. M83’s soundtrack is exactly that, epic and sweeping yet emotional and touching, with a bit of electronic without being as heavy as Daft Punk’s soundtrack for Tron: Legacy.

Despite the fact that it got a 53% on rotten tomatoes and 54/100 on metacritic, I feel this movie is an underappreciated gem, and I loved it. The action, the actors, the story are all great. The music and visuals are absolutely stunning. Admittedly I felt myself not feeling connected to the characters emotionally as much as I might have with other films, so the character development could have been better, and there isn’t anything in this film that is truly mind-blowing. Nonetheless, there are many surprises and twists that genuinely shocked me in a good way in the first viewing, and I absolutely enjoyed this film from beginning to end. I give it a hearty two thumbs up, and highly encourage you to watch it if you haven’t yet. There’s more to this film than I mentioned in this review, but to do so would involve spoiling key parts, so you’ll just have to go see it for yourself!