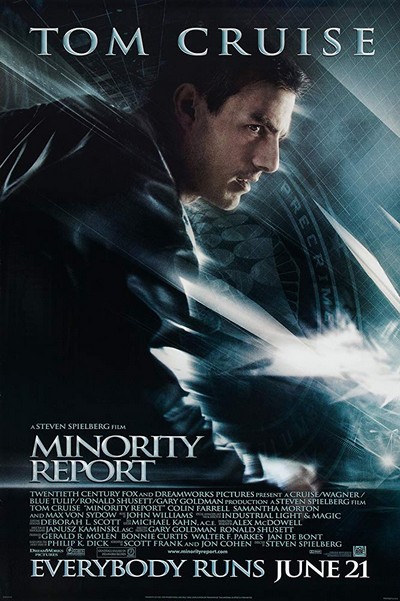 There’s a good chance you probably remember Minority Report, the classic Sci-Fi flick from 2002 directed by Stephen Spielberg. Perhaps all you remember is the cool futuristic hand-interface he used, or the eyeball scenes (you know which ones). If you’ve never seen this film, you should really check it out, as it was very influential, popular, and definitely fits comfortably in the Cyberpunk category. And coming from no surprise, it’s one of many films that was inspired from a short story by Philip K Dick.

The movie itself was optioned after total recall, and is one of the few from Steven Spielberg in the Cyberpunk category, who most recently did Ready Player One — which was also an adaptation from a literary story.

In the year 2054, crime has been virtually eliminated through the creation of Pre-Crime, a law enforcement squad that prevents crimes before they happen. In order to operate, they rely on three gifted humans called “Pre-cogs” who have visions of future events that will occur. John Anderton (Tom Cruise) leads the team and believes in it completely, until one day the Pre-Cogs predict him of killing a man he has never even heard of before. Thus he goes on the run to escape the rest of his team while at the same time unraveling who was predicted of killing, and why. Tom Cruise as John Anderton gives an exciting, excellent performance, alongside an ambitious rising officer Danny Witwer (Colin Farrell), Max Von Sydow as the Pre-Crime director, and Samantha Morton as the main Pre-Cog.

A Dark Cyberpunk Visual Style–for the most part

It’s well known that Cyberpunk has its visual roots in film noir. Which is why it’s easy to recognize in this film, which uses deliberately overlit scenes, desaturated colors, and a negative that was bleach-bypassed in post-production.

“I had John Huston in my ear,” [Spielberg] explained later in an interview. “I went back and looked at The Maltese Falcon and Hawks’ The Big Sleep—to see how some of those film noir mysteries were resolved. They didn’t dot every i and cross every t. They tried to keep you off-balance. They asked more questions than they could answer in those days.” 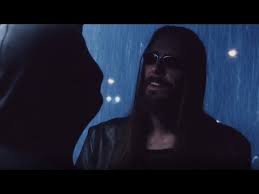 In the first 20 minutes we have drugs, a dealer with no eyes, giant billboards spewing propaganda along rainy pavements and city streets at night, and an introduction of how the 3 precogs allow for pre-crime and how it works (predicting a victim and perpetrator, and a young newcomer just arriving to see how it works) as a man is stopped from killing his wife and her lover. 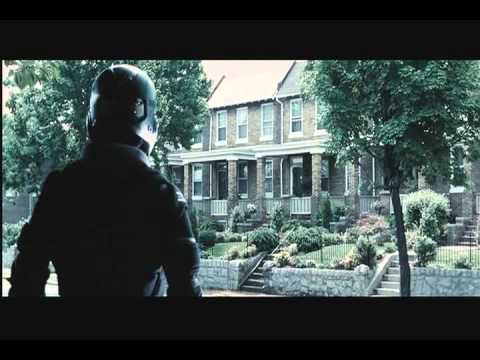 Free Will vs. Determinism

This is interesting in comparison to the Short story, which is a lot cleaner and more elegant. The ending result will be more elegant for the short story as well, focusing more on politics and power than on what happens, whereas the film focuses more on the free will vs. determinism and action elements, as well as the film noir mystery being solved (where is my minority report? asks a desperate John Anderton). The question of this paradigm is in the foreground throughout the film, especially in its climactic conclusion. 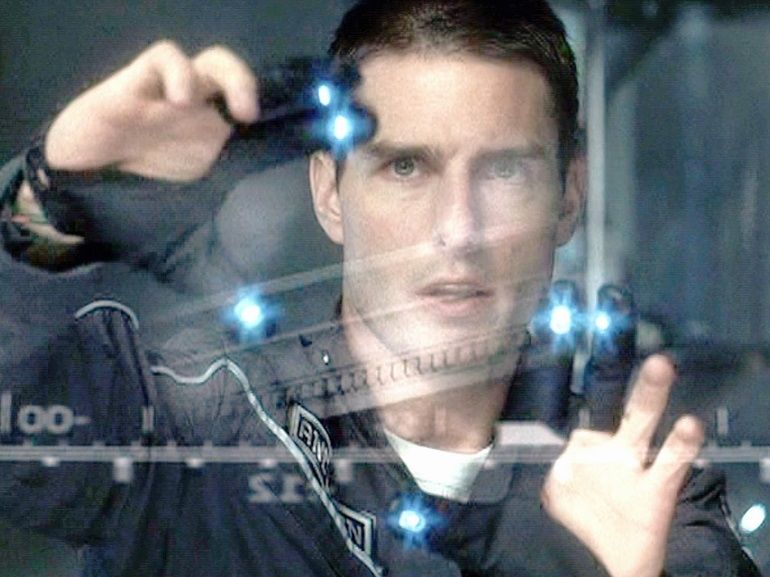 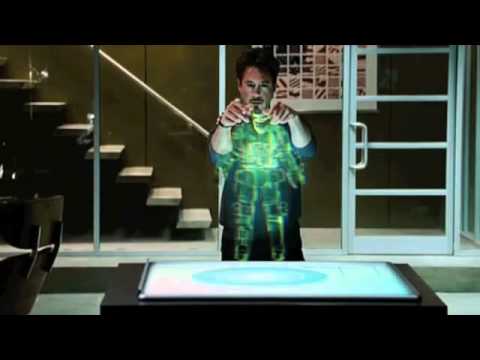 Also, the idea of moving around visual images from a recording using a hand or a glove was completely novel when this film came out in 2002. Robert Downey Jr. has perhaps since popularized it with his marvel character Tony Stark in Iron man, but that movie came out a full six years later, in 2008. Minority report would prove to be truly visionary and predictive of the future to come (with technology nowadays such as VR and Google Glass). 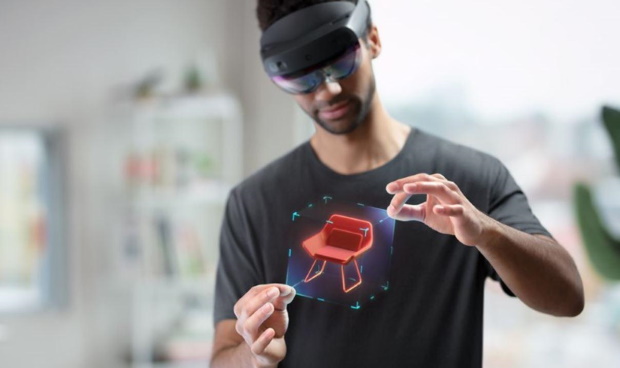 Other futuristic technology includes animations and audio on the cereal box (you can see the hilarious scene of which below), and back-lit glass screens for computers. There are also holograms in Anderton’s room.

This was no coincidence, as Spielberg invited 15 experts from various fields of science and culture to participate in a three-day “think tank” to try to imagine and predict a possible future society. This is how we got the Pre-Crime user interface mentioned above, self-updating newspapers, personalized billboards, and the mag-lev transportation system.

The highways going vertical and horizontal, sloping along buildings, with slim cars like covered motorbikes without steering wheels was incredibly interesting to see back in 2002.

Ads being created by eye scans is definitely something that would be possible in the future.

Also police using jetpacks was one of the first times I saw such things in a movie set in the near future.

“I wanted all the toys to come true someday”–Steven Spielberg

A final note on the technology were the creepy “Spyders”, autonomous robots used as ways to identify humans in buildings. They entered apartments in entire apartment buildings, and no matter what the residents were doing–like a mother with her children, an old married couple fighting, a young couple having sex–all were alarmed, then allowed themselves to be scanned, before continuing on with their business as usual–as if they were quite used to the whole process.

The Soundtrack was done by John Williams and feels as such. Close your eyes at times and it could be mistaken for scenes in an Imperial Star Destroyer, or duel of the fates. I think it’s due to his heavy use of violins and horns. When John finds out he’s supposed to be the one to kill, and then climbs on his own car, again I have visions of Anakin Skywalker doing the same in Revenge of the sith with the elevator. John Williams’ music is so familiar!

The idea of an echo, a pre-cog déjà vu, was something novel in the movie that was not in the short story. However, déjà-vu and questioning reality is of course something Philip K Dick would have liked all too well.

A Subsequent TV Series (that was cancelled)

The movie also resulted in a TV series that was cut from 13 to 10 episodes and then cancelled due to poor ratings.

Minority Report is a fun, exciting film that combines elements of thrilling film noir with a fast pace set in a fascinating realistic future while also making the viewer think. It doesn’t hit you over the head with existential questions the way others like the Matrix might, and while heavy on action, it also gives the film time to breathe. Also, like many of Spielberg’s films, it has a secondary focus on broken families. This film, although Cyberpunk in its seemingly utopian society, is lighter on the typical cyberpunk aesthetics and while it has somewhat futuristic technology, there is no biopunk, robots, augments, or any other transhumanism elements (other than a black market eye transplantation). There’s also no virtual or AI elements either, although there are some drug addiction elements present. Nonetheless, it’s an excellent film, one that’s withstanding the ages, and a welcome addition to the Cyberpunk Genre.

What makes Minority Report so good isn’t the fact it managed to successfully predict several aspects of the future, or that it offered some revolutionizing insight into the ever-going philosophical debate of free will versus predetermination, or that it features great performances from not only Cruise but also Colin Farrell, Max von Sydow and Samantha Morton. This film is great because it delivers a thrilling spectacle that’s at the same time both brains and brawns. As Ebert noted in his original review, Minority Report is a film that works on our minds and our emotions made by a “master filmmaker at the top of his form.”–Sven Mikulec, Cinephilia & Beyond

One thought on “Review: Minority Report”