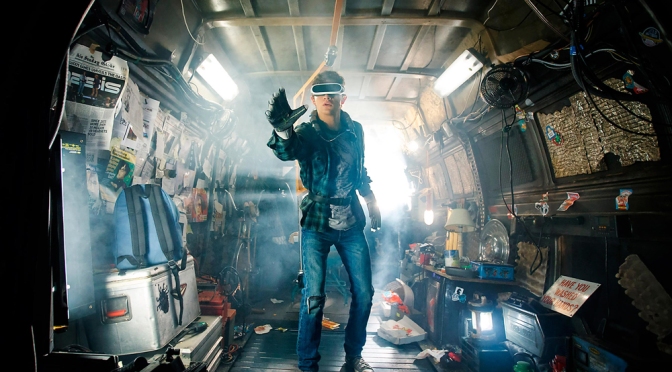 Ever since I read Ernest Cline’s excellent book by the same name, I had been so excited to see this movie ever since I saw its first trailer in the movie theaters. Ready Player One was the kind of book that I finished in a couple weeks, couldn’t put down, and found myself saying “Man, this would be an amazing movie!” as I read it.

So here’s my SPOILER-FREE review of the movie, and some thoughts about how it was different from the book.

First off, let me say that I really enjoyed the movie. Perhaps part of the reason why I really liked it is because it’s different enough from the book, that watching the movie felt like a different piece of entertainment altogether. Sure, the story was still basically the same, but a lot of the action sequences were completely different, leaving me to guess and experience the same surprise and thrill as the rest of the crowd.

A little about the story, in case you have no idea what it’s about. The basic premise is that this movie is about a young man who’s searching for a hidden “easter egg” (read: treasure) within a virtual reality world that serves as place of commerce and entertainment for the majority of human civilization in the future. Although it takes place in a dystopian future, there isn’t much in the movie that addresses that, neither was there in the book. The virtual world, conveniently called the OASIS, is a place to escape the real world and both works leave it at that. The real story comes in the chase for the treasure, as both forces of good and evil race against time to get the hidden egg before the other. In the movie Steven Spielberg masterfully crafts his characters, although they do feel a bit simplistic at times, as if the target audience is primarily young adults.

Which makes sense. After all, the book also felt like a fun bubble-gum kind of story, with little suffering or grit or real violence. This is also mirrored in Cline’s irreverent, lackadaisical writing style.

The other thing that is quick to notice, and the media will also be quick to point out, is how chock-full the movie is in references. From Jurassic Park to Back to the Future, the movie adds to the 80s references with more modern, often video game, references like Halo or Overwatch.

It was definitely fun to see these references pulled out in the movie, sometimes literally from thin air (such as a weapon from one of your favorite video games you’ve spent hours using and picking up suddenly appear on-screen in the main character’s hands). I also thought the direction was very well done, with the camera swiveling to catch fluid actions and angles of the action, especially in the virtual world’s action scenes.

The transitions from virtual to real also felt very fluid, and overall the pacing was excellent as well. There were a few scenes that I felt needed a bit more gravitas, but this didn’t stop me from enjoying the movie.

Overall it was a very fun movie, highly enjoyable if you don’t take it too seriously, and an excellent adaptation. My final verdict: 9/10.