What does Tomorrowland have to do with Cyberpunk? A lot, in fact.

What is Cyberpunk, anyways?

High Tech. Low Life. Such is the TL:DR definition of what Cyberpunk is. While many may argue and debate on what exactly Cyberpunk is (for more of such fun, contentious discussions, check out my “Is This Cyberpunk?” series), most would agree that a major theme in a proper Cyberpunk film is an element of a dystopian society that the medium is set in.

Ghost in the Shell. Blade Runner. Alita: Battle Angel. The Matrix. All of these classics have dystopian societies or worlds in one way or another, some more than others.

So if Cyberpunk is dystopian, what would the opposite be, and would having a clear example of the opposite of Cyberpunk help us in our journey of figuring out what Cyberpunk means once and for all?

So what does Cyberpunk have to do with Tomorrowland?

And this is what brings me to a little film produced by Disney called Tomorrowland.

Tomorrowland was a 2015 film directed and co-written by Brad Bird,  inspired by the futuristic-themed Tomorrowland found in Disneyland, as well as the progressive cultural movements of the Space Age. EPCOT in Disneyworld, along with Walt Disney’s conceptual visions of a planned future community, were also a major inspiration for the film.

The result was a high production value, visually beautiful film that is a lot deeper after a closer look, but also a film that was woefully underappreciated in the box office and garnered what I found to be very critical reviews.

Coming Back to Why Cyberpunk is Important

Here at Cyberpunk Matrix I am of the belief that Cyberpunk is a genre that we need in the present, to make sense of new exciting but dangerous technology being developed now and how it could be misused without the proper moral considerations in the future, especially on a societal level.

Tomorrowland is one of the clearest examples of what technology could build for us as a society, if applied correctly. Tomorrowland is an aspiration that paints a beautiful picture of what could be. That’s important to keep in mind when it’s easy to be constantly in fear, especially nowadays, of what bad could be as well. And this duality, of utopia and dystopia, of warning and vision, is important to take notice of.

Also if you look at Tomorrowland, it isn’t all a fancy happy utopia where everything is good. You might think it would be that, and certainly the video presents it as such with the main character Casey touching the Tomorrowland Pin and getting a vision of another utopian future society. But once she meets Frank Walker, the disillusioned, sarcastic ex-inventor, she gets a cold dose of reality that the audience (at least, the adults in the audience) is all too familiar with. His cynicism even goes so far as to affect her, as well, despite her original optimism (something she points out in the beginning of the film).

What is interesting is the story itself, and the message it delivers underneath.

Unfortunately, to properly unpack the importance of Tomorrowland as viewed through the lens of Cyberpunk, I’m going to have to reveal some major spoilers. As spoiling as you can get, really. So if you haven’t watched this film, and want to, please do before you read the rest of this. This is your last chance to turn back. You’ve been warned!

Tomorrowland and Armageddon: Self-Fulfilling Prophesies Depending on Perspective

Casey is crushed when she learns that their current predicted future is not the utopian world she saw through the pin, but rather that the world will end soon through nuclear holocaust.

But what is the cause of this doomsday end? A self-fulfilling prophecy.

The film explains that they not only discovered a new particle called tachyons, but that once they were able to harness this particle to observe near past and future, they were able to glimpse their doomed future. But the simple act of observing their future created a negativity loop that in effect created a self-fulfilling prophecy. By having a collective world believe that the world would end soon, it changed their actions due to their negative mindsets, and what they feared thus was becoming reality.

We can see some effect that observing particles has on what the particle does itself with experiments already conducted in physics in science, such as with Schrodinger or Wheeler. So while obviously tachyons as represented in the film is fiction, Is the general idea of affecting our future by observing it really so far fetched?

With this reasoning in mind, their solution to the problem then does not seem so far-fetched either. By creating a compelling enough vision of the future, and sharing it with enough people, they were effectively able to create a new future for themselves by injecting positivity of thought, which in turn affects their actual actions.

The Importance of Positivity, Negativity, Warnings and Dreams

Walt Disney had a dream: What the world could be like. It’s why he created EPCOT: The Experimental People Community of Tomorrow. He goes into length explaining his vision of what it would be like before he passed away in this video below. It’s also great to see the source material this film is derived from.

Despite what many may say about Disney and its monopolistic, conglomerate interests, I think Walt had something here. What’s to keep the dystopian dark futures at bay, when we have so many of them warning us how our world could one day become if we’re not ruined? That’s why Cyberpunk is so important, to give us those clear examples of how we don’t want our future to turn up as (although obviously some aspects, like neon lights, flying cars and cyber-enhancements, would be pretty cool). 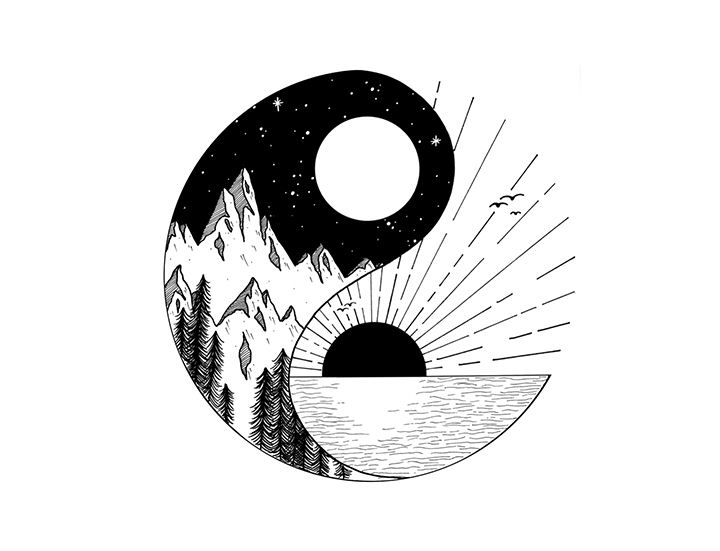 Cyberpunk and Tomorrowland: A Yin and Yang of Light and Dark

But what’s the counterpoint to Cyberpunk, to those dystopian dark futures? I believe that we need a light to complement the dark, a yin and yang, if we are to truly navigate our future effectively, And Walt Disney tried to create that optimistic, positive vision of the future. That’s also why I think Tomorrowland is so brilliant. If you go beyond the glossy special effects and feel-good kid-focused story that Disney loves to sell us, we see the values that are implicitly important to us–or at least should be.

Values of being positive, and not letting our cynicism get the best of us, like it did with Frank when he had a device that showed him the apocalypse at 100% probability. How could he not lose hope in a situation like that? Until someone came along and changed that probability, changed that dark vision of the future by showing him, and as many people as possible eventually, what the future could look like.

Keeping our Compass True to Navigate a Dark Future

It’s also why that last scene in the end is so great. The pins represent hope. They represent a bright future, positivity, and inspiration for good. That idea can come from anywhere in the world–investors for good technology, technology that helps mankind instead of hurting it, could come from any source in any country.

So in conclusion, what I’m saying here is that we need Disney’s positivity. We need light, and hope, to balance out the dark and depressing warning signs that Cyberpunk provides us. Because only by having a balance of both signs can we keep our compass true for the best possible future for all of humanity.

5 thoughts on “Is Tomorrowland the Opposite of Cyberpunk? Exploring the Duality of Dystopia and Utopia”