Cyberpunk 2077 is not for everyone, but if you are as excited for it as me, then this week was a very exciting week for updates for the highly anticipated game coming out in November. With a couple different ways to stream it online, I settled on watching it on The MadQueen’s channel, whom I interviewed a couple weeks ago.

She streamed the event live via Twitch, and I was able to watch her reactions to all the news, along with adding comments throughout the 25 minutes. After the Wire was finished, the stream continued for another 2 hours dissecting the new content, and the stream eventually became another community podcast with the three other usual YouTubers: Lastknownmeal, The Neon Arcade, and the Triple S League. Interviews with all three of these high-profile YouTubers will be up soon. 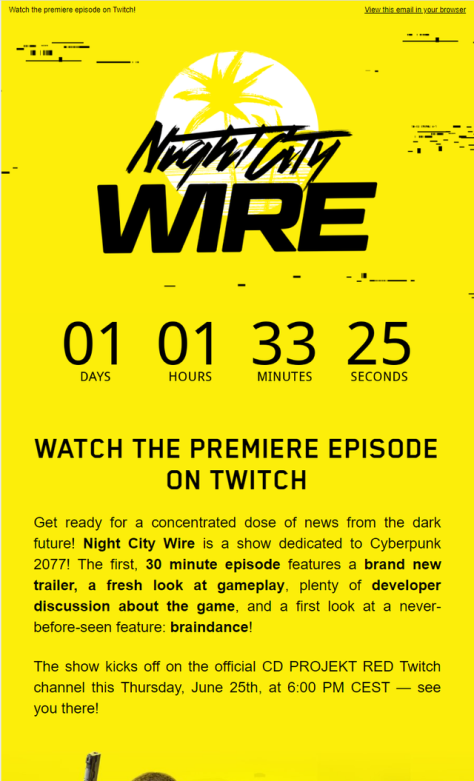 We waited with impatience and counted down to the 6pm Central European Summer Time and were rewarded with a lot of very exciting news for Cyberpunk 2077, which I’m going to break down for you below in the order that it was presented. We also learned that this is the first of possibly three Night City Wires, the second one already coming to us in a few more weeks. So let’s get into it!

The new trailer showcased improved graphics, more of Night City at night, new scenes your friend Jackie, and revealed new locations and characters, as well as car fight scenes, and new augmented body weapons. Oh yeah and we were also treated with a singular scene at the end of the trailer: Keanu Reeves as Johnny Silverhand saying “Fuck.” All of these scenes, apparently are only part of the prologue, and therefore aren’t really spoiling anything from the game.

2. We got more info about the game from Lead Quest Designer Pawel Sasko

Pawel talked about the motivations of some of the characters, specifically about Jackie, Dex, and V. He then talked about an in-game location, Lizzie’s bar, and the gang that reside there, the Moxes. It was really interesting to see this new location and hear about the people and their backstories, it was clear they had put an incredible amount of thought into it. Next he talked about the Badlands, the open area outside of Night City, and the Nomads who live and rule there. Players can choose between three origin lifepaths: Street Kid, Corporate, and Nomad. Each life path starts you off at a different location in Night City, but all three eventually coalesce into the same main story, as The Neon Arcade explains in this video. As I discovered using my own informal twitter poll, most future players will choose the Street Kid path first, with the second choice being Corporate and Nomad coming in third. This was interesting for me to discover as I personally will be choosing Nomad, so knowing that it was the least popular choice made it interesting for me to learn new information about the nomads and badlands. Also, considering everything The Neon Arcade explains in his video, I also objectively think that the Nomad path leads to the most fun beginning part of the game, although the Corporate path seems the flashiest.

Following that he talked about a highly-augmented cyborg from the trailer, Adam Smasher, who also features in the Cyberpunk 2020 Tabletop game. Apparently The Mad Queen is very familiar with him, considering her super excited fist pumps upon seeing Pawel talk about the character on the wire (to see what I’m talking about, look at her reaction at 1:20:00). Finally, Pawel told us a bit about Ripper Docs and Victor Vector.

Cyberpunk 2077 is already getting the Netflix treatment! They announced on their Night City Wire that CD Projekt Red had partnered with a Japanese anime studio called Trigger in order to create a standalone series set in the Cyberpunk 2077 universe called Cyberpunk Edgerunners. The series is set to be released in 2022. This was one of the most exciting pieces of news for me, as I’ve previously mused about the cultural implications if Cyberpunk 2077 was made into a Netflix series to introduce more people to the game and the genre in general, much like Netflix did with CD Projekt Red’s previous hit, The Witcher 3. Also the fact that they hired a local Japanese anime company is just awesome.

Braindance is a recording of someone else’s experience, allowing the recording and playback of all five senses–not just sight and sound, but smell, touch, feeling, and even emotion. It basically looks like a detective mode similar to the one in the Batman games by Rocksteady. You can move time forward and backwards during an event, look at little details, and discover new things about characters and their backstories in Night City. This will surely be an interesting and useful feature for players who like taking their time with games and learning as much as possible about every single detail about the world, which for me personally is always more than necessary. It also looks like a cool feature, but wasn’t too interesting for me personally.

6. Developer thoughts about Braindance and the game in general

Patrick Mills, Senior Quest Designer, joins Pawel Sasko in giving his thoughts about Braindance and the game in general. After Patrick explains the origins of Braindance in the lore of Cyberpunk 2077, Pawel adds that you can use Braindance to learn more about the characters as a storytelling tool. The host then asks Patrick and Pawel what they are most excited about in the game. Here are their responses:

“One of the things that I’m most excited about in this game is the characters and the way they interact with the world. We have got this really interesting world that stretches all the way back to the Cyberpunk 2020 source material and all of these events and all of those things, but those don’t mean anything unless they connect with characters”–Patrick Mills

“For me, I would not be myself if I would not say that I’m the most excited about our quests. With our Witcher 3 team, we really have grown so much, we have learned so much, and we have used all that experience to put them into the quests that we have made, and you will not find really a filler in this game, like everything has meaning, like we put so much effort in making sure that everything is all rewarding, is interesting, is talking about characters as Patrick said, is talking about worlds, is talking about emotions, like touching the player in a really, like a real, way, and I just can’t wait to find out what you think.” –Pawel Sasko

Pawel also then shared his quest idea notebook, which was interesting to look at.

To see all of the Night City Wire Episode 1, you can check it out below. For me, this definitely makes me more interested in playing the game, and it was really interesting to see the updated graphics and the new characters we can expect from Night City. I also really enjoyed seeing more about the Nomads in the Badlands.

But what about you? Did Night City Wire return some of the hype for playing Cyberpunk 2077? Was there anything you were disappointed about? Let me know in the comments below.