Ghost in the Shell SAC_2045: A new GitS Series on Netflix

Ghost in the Shell: Stand Alone Complex SAC_2045 is the latest Cyberpunk addition to Netflix. Based on the 1980s classic manga series Ghost in the Shell (which has produced several movies, tv series, and a live action film), this series is a Netflix exclusive in 3D CG format. The series is slated to have 2 seasons of 12 episodes each, the first season of which just released Thursday. 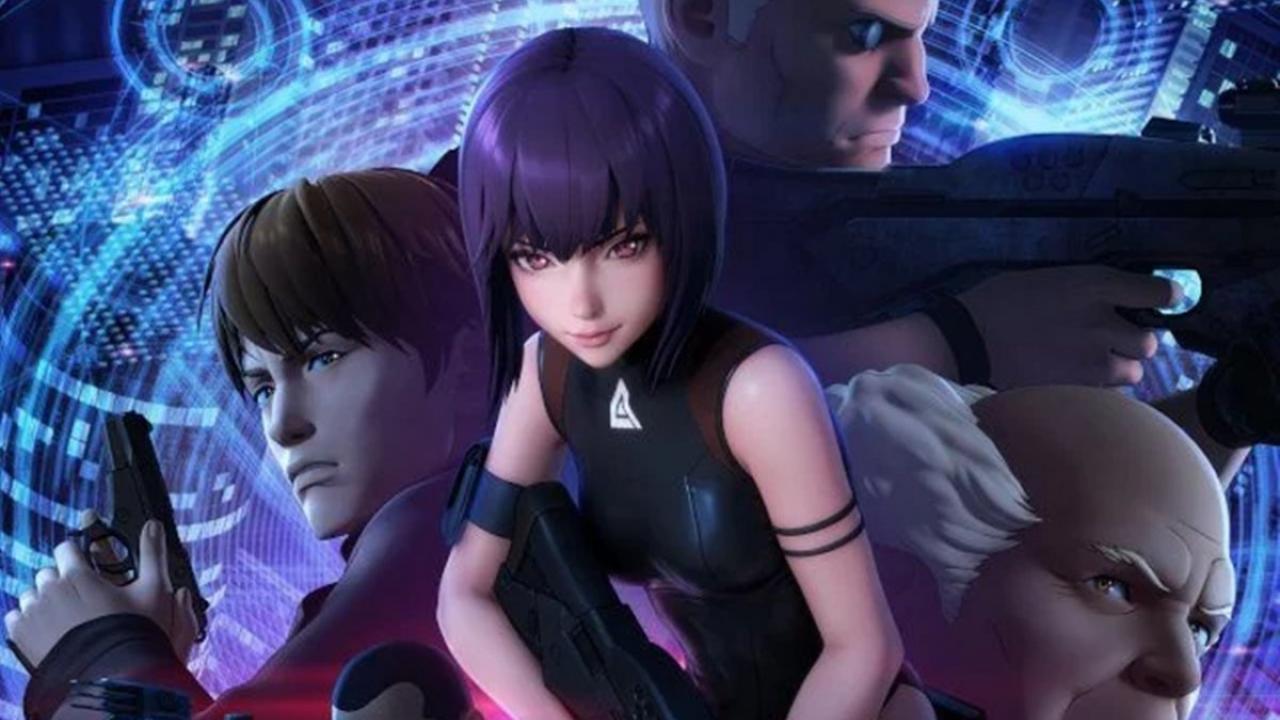 Familiar Ghost in the Shell Characters

Major Motoko is back, of course, along with lens-eyed Batou, Chief Aramaki, and detective Togusa. We also have a new character, nicknamed “clown”. It’s good to see them again. 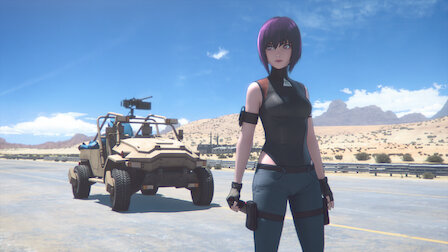 A New Setting: A Dystopian Future

In order to quickly settle any questions about this new world, which is different enough from previous Ghost in the Shell entries but also for newcomers, Ghost in the Shell SAC_2045 does what many shows seem to do to help its viewers: provide intro text to set the scene and answer questions preemptively. Which is a shame, because I really love figuring things like this out on my own, and have always felt that when shows or movies explain away things for the viewers right off the bat it detracts from the viewing experience. Anyways, here is what they say:

“2042: The Great 4 (American Empire, China, Russia, and EU) sought economic stability for its members. Using AI code 1A84, the American Empire initiated war as an industry. The world dubbed it “sustainable war”. However, each nation put its own economic interests first, and the world soon found itself in dire straits.”

“AD 2044: The Global Simultaneous Default cause financial firms to halt all transactions. Paper currency became worthless, and all virtual currency  and e-money vanished from the net. This triggered a rapid escalation in war as an industry. Even advanced nations suffered riots, terrorism, separatist movements, and civil war. Sustainable war slowly but surely began to spread, threatening the human race with extinction.” –Ghost in the Shell SAC 2045 Intro.

This explaining still leaves me with a lot of questions. How does sustainable war make any sense? War against whom? and why would transactions be halted universally and all forms of currency be wiped out? And what did the world replace it with, a barter economy?

You might be concerned this all takes place in the sand and desert but no worries, you’re taken to good ol’ downtown Tokyo 12 minutes into the episode.

The first episode finds our favorite characters from Section 9 packing some Budweisers (no, I’m not kidding) as they begin an assignment to find and pacify a group of “Nomads” (read “bandits”) and find out what they’re up to. What was supposed to be a simple op becomes more complicated as the nomads are in possession of more advanced military weaponry than expected. Meanwhile, the one member not on the team, Detective Togusa, is solving a case of a currency hacker when he gets contacted by the Chief. Turns out the Chief wants Togusa to help get Section 9 back together, which had somewhat disbanded after the world turned to “Sustainable War”. The end of the episode introduces who might become a villain in the series called “The Good One-Percenter” which is a hilarious but interesting name for a mysterious character. I’m excited to see what comes next.

For both the Live Action and Anime movies, the intro sequence is beloved by fans. The artistic process of the android body being coated in white and then skin, while suspended in the air to an ethereal music sequence, is iconic. The SAC series kept the ethereal while introducing an electronic fast and exciting rhythm to it, and once again was excellent.

As for the intro for Ghost in the Shell: SAC 2045, the artistic android body coating is still there, but… die-hard fans may be shocked upon hearing the new sequence.

The song is called Fly With Me by Millenium Parade. On paper, Millenium Parade looks like they would be great to write the score for this series. Check out their bio below:

“Millennium parade is a group of energetic digital creators organized by Daiki Tsuneta, a producer and songwriter based in Tokyo, Japan. The group is composed of artists from various creative fields including musicians, a film director, visual effects artist, designer, illustrator and so on. Their sound is electronic-leaning, featuring synths and pop-inspired melodies, overlaying chaotic beats.

Millennium parade’s concept is inspired by ”Hyakki Yakō” – “The Night Parade of One Hundred Demons”, deriving from centuries old Japanese folklore and tales of mysterious supernatural creatures. The ‘night parade’ saw ghosts and monsters roam the streets causing utter pandemonium throughout Japan. This chaos and mystery underlies the group’s collective vision to present Tokyo’s new values to the rest of the world.

In May 2019, millennium parade held their project launch party show using 3D technology and tickets sold out immediately. Subsequent live shows in Tokyo and Osaka were also in high demand. They have already collaborated with DIOR and written the main theme song for the world famous Japanese animation ‘Ghost in the Shell: SAC_2045’.” –Millenium Parade’s Bio on Spotify

Unfortunately, their single Fly with Me…

…Fails to Live up to Expectations

It’s like they got the wrong music downloaded for the intro sequence.

It’s…hip hop? Or something. Maybe they wanted to try to be new and edgy? But dear god, something must have gone wrong. The song’s lyrics start with “money make the world go round.” In a world which supposedly has no money.

I can’t make this up. This is seriously what they chose was best. I try to give the media I consume a wide berth and a benefit of the doubt, I try to be generous, but this…honestly, the music is just terrible. Thank god Netflix has a skip intro feature.

New and Old Ghost in the Shell Tech 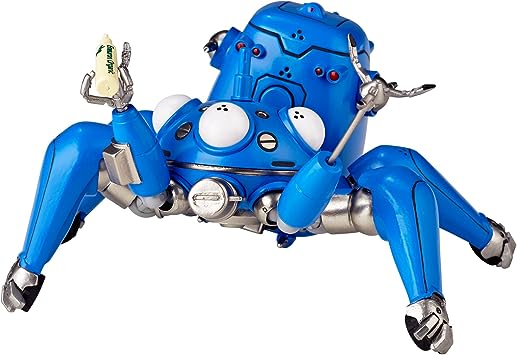 Tachikomas are way too excited to kick ass. Don’t you love ’em?

Ghost in the Shell: SAC_2045 is a fun, exciting new series with your typical too-cool Japanese anime characters. The action, once it starts, is fast-paced, exciting and surprising. The characters are interesting and believable, the pacing is good, and there are even some comical Japanese-style moments of levity as well. It’s definitely worth your time if you can get past the 3D CG video-game style animation, which takes some getting used to at the beginning. The feeling of the first episode, despite the fast-paced action, is one of devil-may-care. Missing to give it a complete 10 is something truly mind-blowing or any deep concepts or ideas. None came up in this first episode, but the series still has time with 12 episodes, and perhaps is in no hurry as it kicks off.

Over here in France, Netflix has the audio as available only in its original Japanese, with subtitles available in multiple languages. If the voice actors are good I usually prefer dubs to subs so I don’t have to watch the bottom of the screen all the time, but it’s nice to watch it in its original language at the same time. 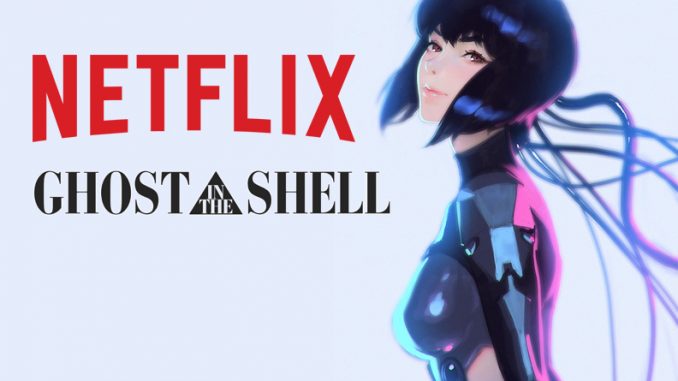 But these are just my impressions. What did you think about Ghost in the Shell: SAC_2045? Did you notice something I didn’t? Do you agree or disagree with my first impressions? Let me know in the comments below!