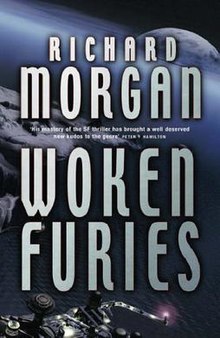 Woken Furies is the third novel in the loosely-interconnected Altered Carbon Series, or more accurately the Takeshi Kovacs Trilogy. This time we find Takeshi Kovacs on his home planet of Harlan’s World, a curious planet where orbitals left behind by the Martians will fire automated hellfire laser blasts on any ships that go too high in the atmosphere, except for certain small areas in the atmosphere. It’s been like that for as long as the residents can remember, and even though the Martians are long gone now, no one knows how the alien technology works or why it’s there at all.

Kovacs is on Harlan’s world because he is seeking to administer retribution to an extremist religious group known as the Knights of the New Revelation due to them killing a long-lost love of his and her daughter.

While trying to secure an escape after one of his attacks, he decides to help save a woman named Sylvie from a group of such religious zealots. It turns out she’s part of a mercenary group called deCom. Kovacs joins this group for a little bit, until Kovacs finds out he’s being hunted by a deadly killer. Sylvie then becomes captured and Kovacs hatches a plan to help her escape. The story also involves an AI entity that may or may not be Quellcrist Falconer, the long-dead revolutionary leader of the envoys. 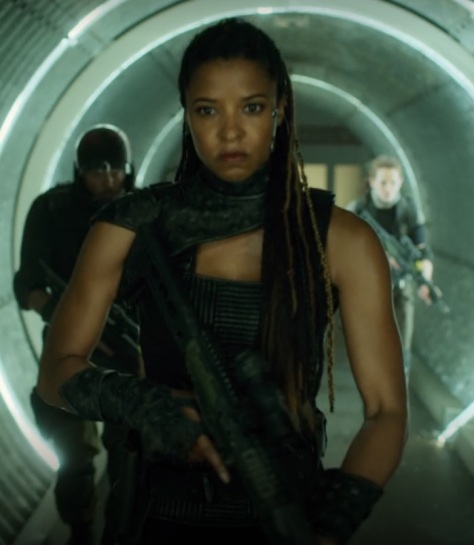 While this plot may seem pretty straightforward, I was only able to piece it together with the help of Wikipedia. Unlike Altered Carbon and Broken Angels, the novel doesn’t feel like one story, but rather two or three, possibly even four, separate stories loosely connected with the common thread of Sylvie and the assassin hunting Kovacs. This really hurts the story a lot, and I found this novel the most difficult book to read of the three of them by far. Unlike the first and second, which felt very much like page-turners at times, I found it hard to follow what was happening in Woken Furies because of how many different characters there were. This is because there are different stages of the book where Kovacs teams up with different groups. With each group he either has a mission, or hatches a plan to do something, that involves all members of the team, not unlike a mission Ethan Hunt might carry out in Mission Impossible. So not only are the steps of the missions complicated, the actors and targets keep on changing as well, as do the teams Kovacs is with. It also hurt the pacing of the story, and this is the most important detractor to this novel.

Unlike Altered Carbon and Broken Angels, there is no clear end goal for Woken Furies. With Altered Carbon the book was set up from the beginning: Laurens Bancroft hired Kovacs to solve his own murder, and the readers go along for a ride with that overarching goal clearly set: we want to know what happened, why, and how.

With Broken Angels, again the goal is very clear: a mysterious Alien artifact has been uncovered, a portal that leads to who knows where, and Kovacs and his (one, non-changing) team work together to try to open the portal and find out what’s on the other side.

With Woken Furies, however, things just…happen. Kovacs saves Sylvie on a whim, because he doesn’t like the religious zealots and he wants to save an innocent woman. When he gets roped into her deCom group, he goes along with them because it’s convenient, but again, there’s no overarching goal or mission when he’s with them. As I read this, I thought this would be the group that Kovacs would stick with until the end of the book. 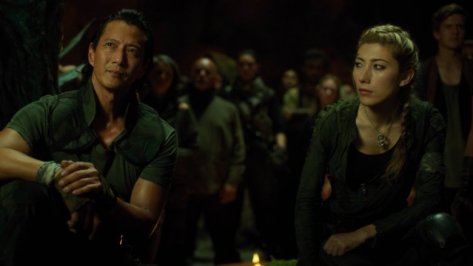 Revolving door of groups to team up with

So it was confusing when something happened that caused him to leave that group, find another group in another location, and have the same thing happen. This time his second group is acquired because he is looking for a place to hide from the deadly assassin that is pursuing him. Again, he goes along with the group because it’s convenient. There is still no overarching goal at this point.

Despite all this, it’s still a good book

Richard Morgan is an excellent storyteller. He writes as if the world is real and it’s up to us to figure out what is going on, much like William Gibson did with Neuromancer (which was also very confusing for me to read). The action scenes are gripping, there is some mystery, but nothing like the Film Noir style we saw in Altered Carbon. There is also none of the space opera-esque nature that we saw in Broken Angels. Rather, it feels more like a series of heists, a bit like Ocean’s Eleven. If you go into this book knowing there are different groups with different stories that will all be tied up eventually in the end, that might help. But when I went into reading this book, I had no idea, and the difference between Morgan’s 1st and 2nd book is striking. Other than the main character being the same, this book bears very little relation or connection to the others, and doesn’t feel much like a sequel at all.

Good action, dialogue, and intrigue, but the discombobulation of the different stories makes the plot confusing enough to lose most readers, like myself. As a result I felt it easy to put the book down because I didn’t know where it was going, and therefore lost interest relatively easily. There were some very interesting new concepts to think about in the book which I appreciated, however, such as double-sleeving or the nature of AI consciousness. Still worth reading, just not as good as the other two, and know what you’re getting yourself into.