Have you sold your ballsack to attend Wreck-Fest X yet? Not to worry, reading Killtopia is the next best thing. 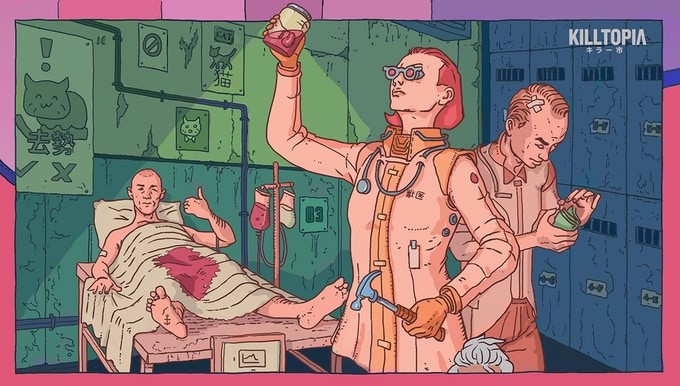 Killtopiais the new upcoming graphic novel by Dave Cook and Craig Paton, published in Glasgow by BHP Comics and under Cook’s own brand of Card Shark Comics. It’s currently still in the crowdfunding stages, but their kickstarter has at least allowed them to publish their first chapter.

Killtopia has all the fun tropes that one might expect or hope for in a cyberpunk comic. Robots, bounty hunters, future tech, Japanese culture, and vivid dystopian futures. It checks all the boxes you want. The authors’ inspirations include Blade Runner, Battle Royale, Pacific Rim, Horizon: Zero Dawn, Borderlands, andMetal Gear Rising: Revengeance.

If any of the above made your mouth water, then you’ll probably love this graphic novel. My first impression of the cover and first few pages of Killtopia was that it felt very reminiscent to Josan Gonzalez, the cyberpunk illustrator and publisher from Spain whose artbooks and prints are similar in their high levels of detail. 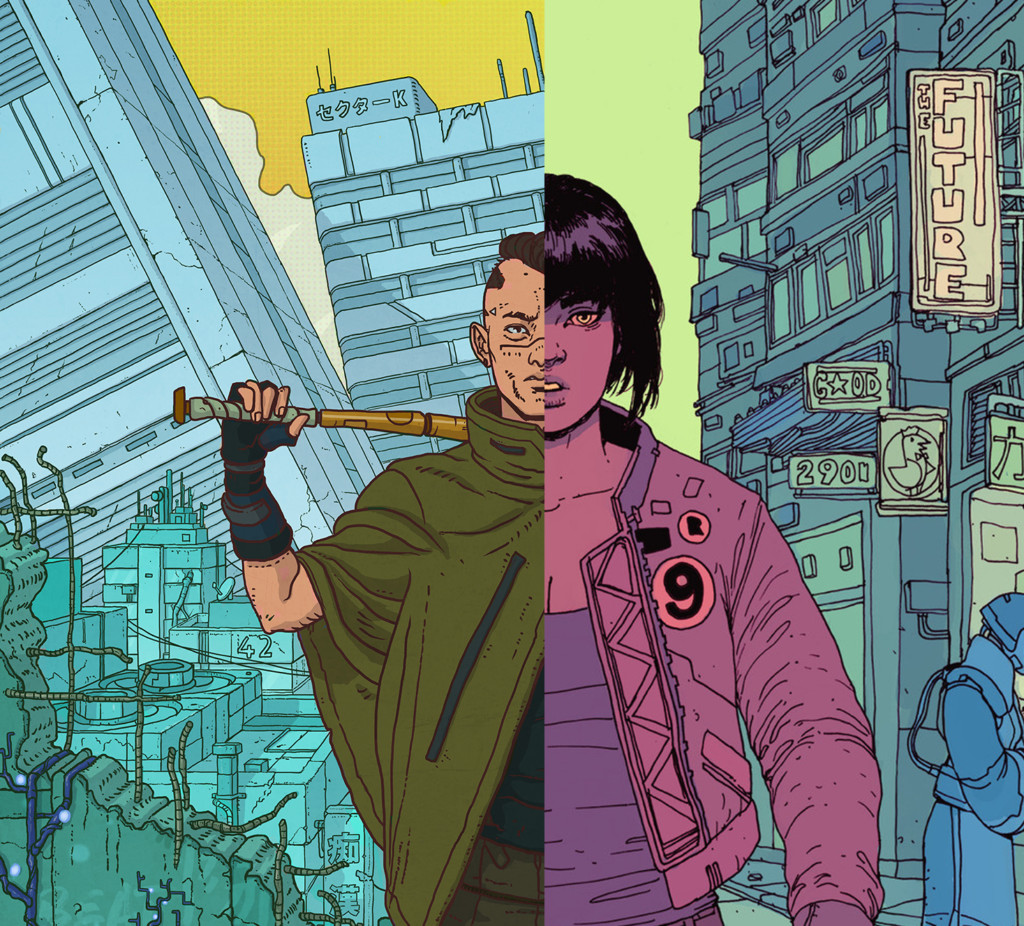 It was also fun to see little easter egg items, like the glasses from Transmetropolitan prominently featured on one punk’s face in the beginning pages. This is no coincidence, as the titular cyberpunk comic was what apparently got Cook interested in comics in the first place. They went the extra mile to ask the author Darick Robertson if he would be willing to get involved, and much to their surprise, he agreed to provide art prints to backers of their fledgling comic! 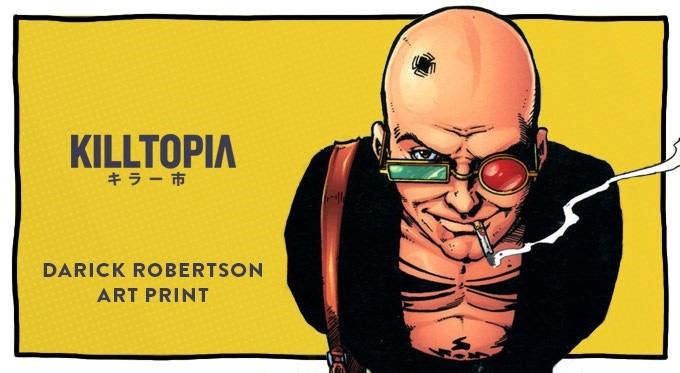 As part of their stretch goals that they would later “wreck”, Cook and Paton ended up giving out to fans who helped back their project a variety of different artwork including a Judge Dredd/Tom Foster art print, retro game cover art postcards, and a Killtopia Original Soundtrack. This was the first time I had ever heard a comic selling a soundtrack along with the comic itself.

Since there’s a lot of discussion and controversy over what constitutes official “Cyberpunk Music” I was excited to hear what type of music they chose to produce. The music itself is atmospheric, relatively simple, and a little reminiscent of Vangelis’ work on the original Blade Runner, if it were all done on an electric keyboard. While not being the best Cyberpunk music I’ve heard, the YouTube video conveniently features a lot of the artwork from the comic itself, so it serves a dual purpose.

Chapter 1 takes place in a futuristic dystopian Japanese metropolis called Killtopia and its surrounding areas. The city is being overrun and terraformed by violent robots that are called “mechs”. As a result, corporations, the military and gangsters hire bounty hunters called “Wreckers” to go into the city, kill the rogue mechs, and then bring back their precious tech in exchange for money and fame. The main character, Shinji, is a poor wrecker who risks his life to obtain and sell tech in order to pay his sister’s medical bills without her knowledge. She has a common disease without a cure called The Rot, which is a mech-caused Nano-Virus that breaks down human cells from the inside out. The other main characters are Crash, a sentient robot who teams up with Shinji, and Stiletto, the #1 wrecker of the city.  Shinji believes Crash can help his sister and countless others be cured from The Rot, whereas Stiletto is just looking for more fame, but her character may develop within the comic.

I took my time reading this comic because of all the details there were to enjoy in each panel. It felt a bit like a comic version of Ready Player One, in that there were so many references on each page. I mentioned above the nod to Transmetropolitan with Spider’s glasses, but I also noticed eye implants similar to Batou from Ghost in the Shell, and the out-of-panel introductions to each secondary character felt like the introductions a player sees when playing Borderlands and meets a big boss or assisting NPC. The fashion sense of the people in the comic also deserves its own consideration, as it runs the gamut of punk style in very fun, different cyberpunk ways. Capitalistic marketing of Killtopia’s own-world products are front and center, which was very reminiscent of Blade Runner. For instance, we see marketing for “Kaiju Cola” all over the city on billboards and walls, but also slapped on the characters themselves.

Kaiju of course is a nod to Godzillaand the more recent Pacific Rim. There are also Japanese Kanji characters all over the comic, which I wish I could read, but according to the authors they’ve checked the Japanese and Japanese culture elements already by family members and friends living in Japan.

I could also see some budding philosophical issues being raised. In the middle of the first chapter Shinji decides to protect Crash from another wrecker, which raised the age-old question of whether AI life should be spared if it’s not human.

Although this comic is very graphic in some of the deaths of non-important characters, which makes the comic that much more memorable, it also doesn’t take itself too seriously. There were several scenes in the first chapter where something is happening in the background as characters are talking (such as an overpowered robot misbehaving with an interrogation victim, unbeknownst to its owner) which I found very comical and well done. Sure it’s a common humor device, but it’s ubiquitous because it works, and works well.

The cyberpunk visuals are detailed, intricate, and neon-soaked beauties. It’s filled to the brim with cyberpunk themes and references, which makes reading the comic fun if you can catch them all. It’s also clear that the producers of this comic have experience drawing comics—the way the narrator and speech bubbles are drawn, the flow from one box to the next, and the interlinking panels is all done in a very professional way. This of course is for a reason, with Cook and Paton both having experience creating other comics before this one. Cook is actually the founder of Card Shark Comics (under which Killtopia is produced), and backers actually get his previous work (a post-apocalyptic series called Bustand a dark fantasy series called Vessels) along with Killtopia if they support the Kickstarter. It’s too early to tell how well the story will be, but by the end of Chapter one I was drawn in, left on a modest cliffhanger and wanting to read what comes next. The only fault I could give to this comic is the soundtrack that comes with it, being somewhat underwhelming and unoriginal, feeling like a creative reimagining of things we’ve heard before. To learn more about the Kickstarter, check out their extensive page here.

(Note: This is a re-post of a piece I wrote for Cyberpunk website Neon Dystopia, where I am a regular contributor.)