Note: This is part of my ongoing series Is This Cyberpunk? where I look at different media in the Cyberpunk grey area, to help come to that ever-elusive definition of what Cyberpunk really is. In today’s post, I will consider if Big Hero 6 counts as a Cyberpunk movie, or not.

What is Big Hero 6 Anyways?

Big Hero 6 is a 3D computer animated Disney film that came out in 2014. It’s loosely based on the Marvel comic book series of the same name and tells the story of Hiro Hamada, a young prodigy in robotics who creates a technology that becomes stolen by a masked villain. With the help of the medical robot Baymax, Hiro founds a team of superheros to help fight the masked villain and reclaim his stolen tech. 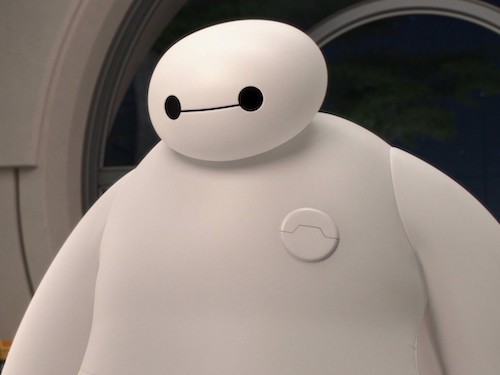 Baymax, the Robot of Big Hero 6

Very early on we meet Baymax, a lovable inflatable medical robot that dispenses both physical and emotional assessments and treatments on any human within distance. He also learns and adapts pretty quickly to his environment, including how to fist bump.

“I will add ‘fist-bump’ to my care-giving matrix” –Baymax

A very important character you meet early on is Hiro’s older brother, Tadashi. At the beginning of the movie we find Hiro lost, unmotivated, and participating in illegal robot  battles in his free time. In order to set him back on the right track, Tadashi introduces brings Hiro to his University’s lab, where he shows Hiro Baymax.

This is the first important acquaintance that Hiro makes early on in the movie. Tadashi will also significantly impact Hiro’s motivations throughout the rest of the movie. But when Tadashi brings Hiro to his lab, he also introduces him to the rest of his friends: Go Go, Wasabi, Honey Lemon, and Fred. These four will later become the rest of the Big Hero 6 team members.

Hiro becomes motivated to develop a new technology and present it in a conference meant to impress the judges enough to make them offer him an invitation into their prestigious university. During the conference, however, there is an incident that sets into motion the plot for the rest of the film. Hiro’s tech is lost, or so he thinks, before he finds it again years later in the hands of a mysterious figure wearing a kabuto mask. In order to solve the mystery of who this masked man is and reclaim his tech, Hiro teams up with the four friends and Baymax to form the Big Hero 6 team. One of the first things that really springs out to any proper Cyberpunk fan is the very Cyberpunk-like aesthetic in this film, in particular in this film’s setting. The movie takes place in a fictional city called San Fransokyo, a rather obvious mix between San Francisco and Tokyo. It would appear to be modern-day San Francisco, but if the city had been taken over by Japanese inhabitants. This city kept the Golden Gate Bridge, but added Japanese architectural flourishes to it.

It turns out that there’s a reason for why San Fransokyo seems like a mix of the two cities. According to the city’s Fandom wikipedia page, San Francisco experienced a major earthquake in 1906 caused by the collapse of an energy amplifier created by the artist Lenore Shimamoto. The reconstruction of the city led to its rebirth, as Japanese immigrants combined the San Francisco and Tokyo-style architecture in order to mitigate the effects of any future massive earthquakes.

As a result of the massive metropolis that is San Francisco, combined with the neon lights at night time and a more tech-focused slant of the city, this movie seems to have taken very clear inspirations from Blade Runner. Take a look:

Unlike many Cyberpunk films, however, they show both the night and daytime. San Fransokyo in the daytime looks like this:

San Fransokyo during the day

Throughout the city are floating blimp-kite things with fans. They look like Energy kites that provide wind power to whatever the kite is tethered too. That’s just a guess, however, as the movie never explains what they are. In an incredible stroke of good luck (for me, at least) the viewer is treated to a closer look at the city from the air as halfway through the movie, Hiro creates a suit of armor for Baymax that includes a jet pack. Hiro then rides Baymax up in the sky, eventually landing on one of these energy kite blimp things to enjoy a beautiful sunset. It looks like a lot of fun.

Baymax and Hiro atop an energy blimp thing.

But it’s not just the city itself that looks Cyberpunk as hell. Hiro himself could be counted as a little Cyber Punk, as he starts off the movie in illegal Black Market Robot battles that strongly reminded me of that short film Sonnie’s Edge from Love, Death & Robots.

Robot Battle In the Ring 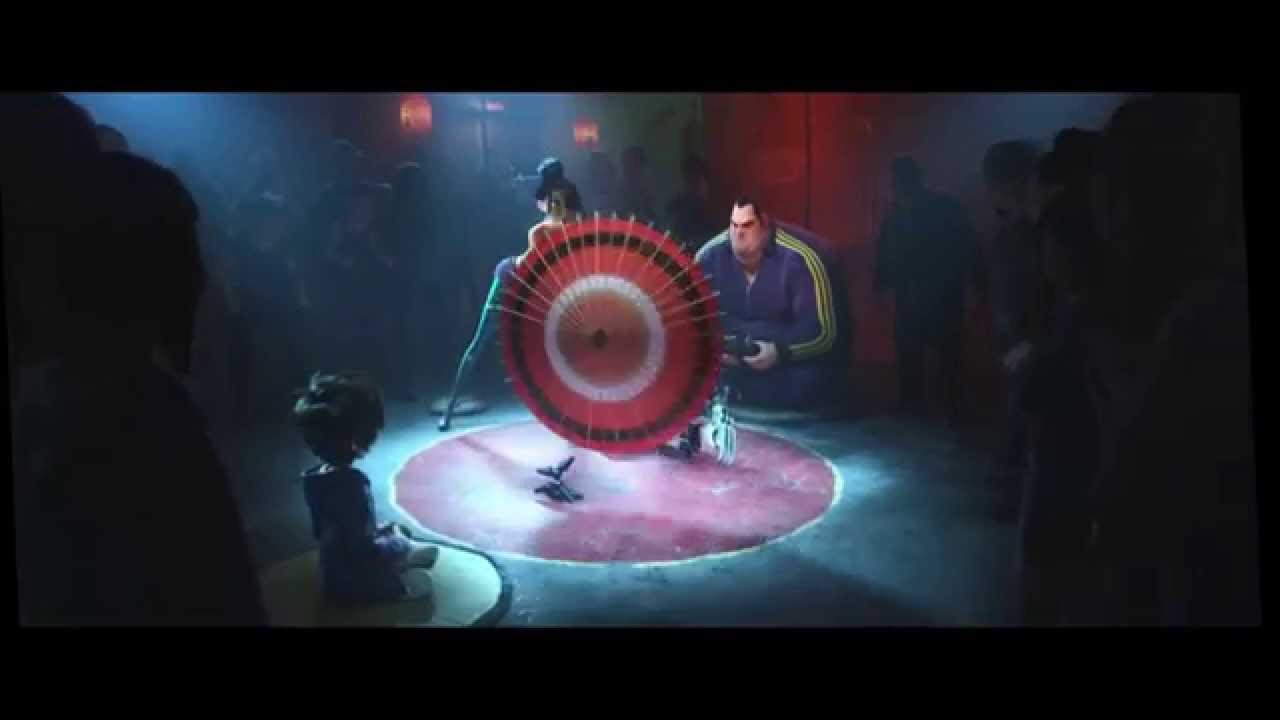 This was really interesting, fun, enjoyable, and different from what I was expecting. It was the Punk aspect that I had been looking for. But the movie goes well beyond just Punk. There’s a lot of high-tech nods that were really fun to see featured in subtle ways throughout the film. For instance, Hiro uses a virtual keyboard, and then later on designs Baymax’s armor in the air like Tony Stark modeling his Iron Man armor.

In the same frame, he alternates between an Apple standard physical keyboard, and a virtual keyboard projected onto his table using a little blue projector. The blue colors and green virtual screen also felt very Cyberpunk.

Then, in what clearly felt like a nod to the Matrix Trilogy, Hiro programs Baymax to fight using Kung-Fu movies! He uses a program to capture the movements shown in the action scene, then maps them out into moves that Baymax can mimic. Baymax literally has his own “I know Kung-Fu” moment!

If that’s not Cyberpunk then I don’t know what is. The final thing I noticed in the film was Hiro’s use of 3D printers, technology we already have today, in order to create Baymax’s armor.

So yes, it’s cyberpunk, but it’s more of a Superhero movie with a Cyberpunk style. It just barely passes the sniff test to count as Cyberpunk, but it passes the hurdle nonetheless. With good pacing and a plot that’s not too predictable, Big Hero 6 shines in the development of its main character but loses a bit with the amount of characters it has (all 4 sidekicks are quite forgettable). With a solid soundtrack, incredible visuals, and a good amount of humor and fun, this is the perfect Cyberpunk animated Disney movie.

So that’s how I feel about the movie. But what do you think? Have you seen it? Do you agree with my verdict? Why/why not? Feel free to have the final word in the comments below.