If you’re reading this blog then that means that you’ve probably seen the Matrix trilogy. But! Have you seen the secret footage embedded in the 2003 video game Enter the Matrix? Few people know that the Wachowskis shot about an entire hour’s worth of additional footage to add to this video game’s story line, a first of its time.

Enter The Matrix tells a tale that runs parallel to The Matrix Reloaded.

Having some Deja Vu?

The story begins with the crew of the Logos (comprised of Niobe, Ghost, and their smart-mouthed operator Sparks) as they race to acquire a message left in the Matrix by the crew of the Osiris (whose story was told in the short digitally animated film The Final Flight of the Osiris in the Animatrix). Once their team manage to get their hands on the package, they relay back to Zion a frightening message of a giant machine army digging towards the final human city. As a result, Niobe’s crew will have to assist Neo, Morpheus and Trinity while the rest of the Zion fleet mobilizes outside the city to protect it from the imminent machine attack. You play as either Ghost or Niobe, and the story will change in small ways based on which character you chose, and which decisions you make.

Unfortunately, since the game came out in 2003 you can probably tell that the graphics haven’t aged very well. However, Anthony Wong as Ghost and Jada Pinkett-Smith as Niobe deliver excellent performances as voice actors, in addition to the live footage the game delivers in between moments of action.

To watch the entire series of footage in chronological order, you can see it here (42 minutes long) or if you lots of extra time and want to see the video game cutscenes as well, you can watch it in its full entirety here (1 hour 16 minutes).

Is it worth the time? What’s new?

If you are a big fan of The Matrix Reloaded, then I highly recommend you watch these extra scenes. It provides a lot of extra information about things like how important the information was of the machines digging towards, as well as Niobe’s relationship with Commander Locke, and Ghost’s relationship with Niobe. It was also incredibly rewarding to see some of the exact same scenes we saw Neo in, with the same characters, but with new main characters going through them.

We get to revisit Persephone, for instance, and the Keymaker, as they interact in very important ways with Ghost or Niobe. We also get to revisit Agent Smith as he interacts with humans inside the Matrix, and relive the fear that he and his fellow agents caused anyone who crosses his path. We even get to see what choice words of advice the oracle gives for both Ghost and Niobe. 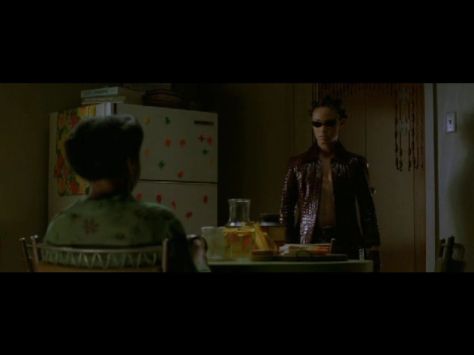 Will Niobe eat the Oracle’s cookies, or have some of her candy? Does she even have a choice?

I also really enjoyed Sparks’ character, as a much more interesting operator than Link was. While Link never questioned Morpheus and always did as he was told, keeping his fears and thoughts mostly to himself, Sparks constantly is eager to explain why captain Niobe’s decisions are dangerous, reckless, and will surely lead to his untimely demise.

The final thing I want to mention is the orchestral score. It’s just as good as the soundtracks in The Matrix and Reloaded, from Don Davis of course. While some tracks are the same, it occurs to me that the Original Soundtrack for the first and second Matrix movies probably did not include any additional soundtrack work Davis did for the videogame. As such, it’s almost worth it alone just to listen to the soundtrack. But if you want to save yourself some time, you can always simply watch it all on YouTube.

Why you might not have heard of the game

For all its excellence, sadly, the game play for Enter the Matrix is what holds it back. It’s laggy, the controls are difficult to work with as are the angles, and ultimately it makes what would be otherwise a great game of sound and storytelling a slog that isn’t fun enough to keep up with unless you’re a die-hard matrix fan.

Which is why WB has a real opportunity here at releasing a new video game for Matrix 4 that is up to par with the times. Can you imagine a Matrix video game with the mechanics of the Arkham Asylum series?

Anyways, did you play Enter the Matrix, as I did, way back when? What did you think of it? If not, go watch the cutscenes. Are they a good complement to Reloaded? Let me know in the comments below.